I’m headed to SUNY Buffalo this week for a min-conference on Mathematical Modeling of Political Behavior (thanks for the invite, Phil Arena), and to help tie my hands against spending all my time editing them, I’m putting the slides for my presentation, “Showing Restraint, Signaling Resolve,” up here on the blog.

I’ve presented this paper around quite a bit (see here and here)—and since it’s under review, I’m not going to put it up here—but the essential point is that coalition partners—specifically, the desire to ensure their cooperation—can have a profound impact on bargaining, signals, and the probability of war. Against strong targets, the desire to keep a skittish partner in the fold discourages a coalition leader from bluffing; so, although its partner “waters down” the threat, it helps discourage war. Against weak targets, preserving military cooperation discourages a coalition leader from signaling its resolve; instead, it acts like an irresolute state, tempting the coalition’s target to risk war. As it happens, this pattern shows up pretty strongly in the data (which, trust me, was no small relief), and while the empirics aren’t in the version currently under review, I’m sure they’ll show up somewhere eventually…

And it appears that Buffalo’s going to be a bit, ah, chilly: 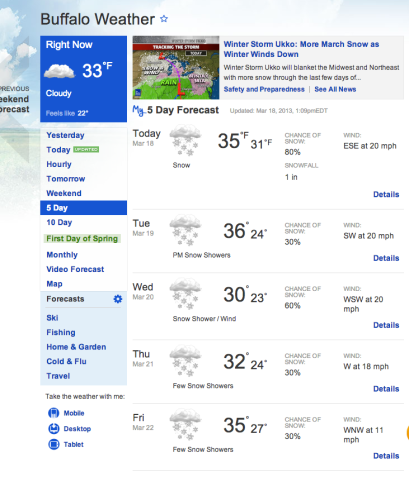 This weekend (well, tomorrow), UT is hosting the Texas Triangle IR conference, and we’ll have representatives from UT, A&M, Rice, UNT, and Texas Tech in attendance, presenting and discussing research on what looks like a pretty diverse set of topics. After a couple of harrowing weeks of work turning my APSA paper into something totally unlike what it used to be (in fairness, it’s just being split into two papers), I’m putting the finishing touches on my contribution, “Showing Restraint, Signaling Resolve.” (I’ll post slides once I’ve got them ready. I described these last two weeks as “harrowing,” remember?)

The core of the paper is a model that examines the role of third parties (specifically, skittish coalition partners) in the dynamics of signaling and crisis bargaining. The basic story goes something like this: a coalition leader can use military mobilization to signal resolve, but higher levels of mobilization can mean a costlier war, which makes one’s allies nervous. So there’s a dilemma: mobilize heavily and signal resolve to an opponent (but risk fracturing the coalition), or mobilize lightly, failing to signal resolve but preserving the coalition. Plenty of popular—and even scholarly—discourse expects that skittish allies are a bad thing in this context; they water down threats (thereby mucking up attempts to send credible signals), and they don’t pony up when it’s time to fight. The model, though, shows that this isn’t exactly true. The presence of a partner—especially one that’ll leave the coalition rather than get involved in too costly a war—can either increase or decrease the probability of war, depending on the strength of the target.

Yep. The strength of the target.

Here’s how. When the costs of war are spread unevenly through the coalition (say, if one partner has to host airbases or supply depots for troops in a next-door conflict zone) and a partner can refuse to cooperate if the crisis escalates to war, then one of two things happens. First, when the target is relatively strong, preserving military cooperation is enough to convince an irresolute coalition leader not to engage in risky bluffing that leads to war (when bluffing would occur without the partner). Second, when the target is relatively weaker, an otherwise resolute coalition leader that could mobilize heavily to signal resolve chooses not to, preserving the coalition but also generating a risk of war where none would occur if it escalated to a higher level.

The takeaway point? Well, I think there are a few. But first and foremost, we can learn something from this about how coalitions, not just states acting alone, bargain with their targets—something we simply don’t know much about, despite their ubiquity. Turns out, in a point related to this post, that the effects of the multilateral distribution of power depend heavily on intra-coalitional politics…and that, for now, has me pretty excited about presenting this. It’s a little thin empirically—though I do think it accounts for signaling behavior in at least the Berlin Crisis of 1961 and in the lead-up to the Kosovo War—but I’m hoping that a good round of comments from the Triangle and an upcoming talk at UVA will help flesh it out. Slides, then post-mortem to follow…

As it’s starting to look like Ghadafi’s regime is crumbling before the rebel advance into Tripoli (note the equivocation there? don’t want to get ahead of myself…), we’re also seeing the debate over whether American/NATO intervention was “worth it” (some seeing vindication, others saying we should’ve made it even faster). As to whether it was a wise decision to intervene, the best way to judge that is to consider not what ultimately happens but what information decision makers had when the decision was made. Still, we can learn a lot from ex post judgments of costs and benefits—it’s one more data point that can inform us about the future—as long as we’re careful to neither blame the lottery player for losing powerball nor call her a genius for winning it.

So how are we to judge the NATO decision to protect civilians and, by extension, help the Libyan rebels in their advance towards Tripoli? First things first: by any standard, this was an exceedingly short civil war. The average one drags on for years, and 5/6 months is a rounding error compared to most of these things. The cost to the US, at least, is estimated at roughly $1.1 billion, so it seems to me that the way to go is to use what we know about civil war duration and the data for this particular case and see what we’d expect the duration of the war to be in the absence of NATO intervention…

…not, of course, that I’m going to run that model this morning, but, you know, it would be a good idea.

As the latest batch of Wikileaks documents hits the web, it’s hard to keep track of too much, but here’s a brief comment on something that caught by eye: a discussion of how the Obama administration won cooperation from formerly reluctant great powers on a new, tougher sanctions regime against Iran.

You’ll recall John McCain’s criticism of Obama’s willingness to talk to Iran back on the campaign trail (odd, to me, since that’s the best way to convey even threats), calling it a sign of weakness. Turns out that critique falls flat once you see exactly what the administration was up to, which was ensuring that those countries better able than us to put economic pressure on Iran (Russia, China, Germany) were on board. Let’s face it: without these countries on board, we just can’t do enough damage to make any real difference on Iranian calculations.

Two things stood out to me. (1) The administration might, and I stress might, since there’s no obvious quid pro quo here, have used the bargaining chip of the missile defense station in Poland to get Russia on board with punishing Iran. Not long after taking office, Obama delayed the cancellation of that program, and at the time I posted that I suspected he did so in order to keep a bargaining chip in his pocket with the Russians, and it might have paid off in this case, as they’ve now signed on to the latest two rounds of big-time sanctions. (2) Knowing that China’s cooperation would hurt Iran but that it also gets almost 12% of its oil from there, the US worked out a deal by which the Saudis would guarantee to sell oil to China to make up the shortfall caused by disrupted trade with Iran. As a result, the Chinese are on board.

All in all, not bad, because it’s very shrewd diplomacy, and recent indications are that the sanctions are beginning to bite. Now, will they have an effect? Certainly not in the short term, but should further developments dictate more stringent action, we’ve certainly got the beginnings of a coalition in place, and that might be one of the more reassuring things to come out of this whole mess.

Today (today being, uh, long ago), I posted the first draft of a new working paper, “Interstate Coalitions and Strategic Restraint” ( find it on the Research page). It’s the second paper in my broader project on coercion through coalitions, and this one—despite the absence of such references in the paper—came out of thinking about coalitions as sheriff’s posses: they collect a lot of power under one banner, but if they don’t break up after bringing in the first fugitive, they can be a threat to the order they’re nominally out to preserve. The posse analogy is surely not new to the field, but it seems to me that using it to think about the problem of strategic restraint is, and I use it to model the alignment decision of an observer that watches a coalition in action and worries about facing some or all of its members in a future crisis.

More after the jump…