After setting the table in Tuesday’s lecture, today was about practicing one of the key tools we’ll use in trying to make sense of the First World War: game theory (especially the associated concepts of strategy and equilibrium). Each week, we’ll address a puzzling outcome—for example, the outbreak or expansion of the war—by thinking about how political actors doing their best to pursue their goals (however defined) might find themselves making the choices that they do. In politics generally, but in this course in particular, one of they key parts of any story has to be strategic interaction: that is, how actors make choices in anticipation of what others will do, and how those choices add up to something often quite surprising (or, often, something quite tragic). Game theory is designed to do just that, and today we illustrate how we’ll use the tool with a simple pre-war puzzle: the Anglo-German Naval Race.

The puzzle is actually quite simple. After several years of competing in the building of new capital ships, Germany and England had spent large sums of money, only to see the balance of naval power between them virtually unchanged by 1912. If each would like to maintain/improve its naval position while avoiding wasteful spending (a not-unreasonable goal), how did it come to pass that their naval positions barely changed, yet they spent time and money on an expensive arms race? Clearly, both could have been better off not engaging in the race (yes, we’re abstracting away from the desire to build better ships in the first place, as well as why countries choose navies over armies), yet they were unable to avoid it. Why?

(Note. This means that we want a model that reflects the fact that a socially preferable option—no arms race with an unchanged distribution of power—exists, but also explains why players can’t reach it.)

To solve the puzzle, we identify the players (UK, Germany), their goals (enhancing naval position while avoiding waste), their actions (building ships or not), the possible outcomes—an arms race, no arms race, or a unilateral buildup by one side or the other—and their possible strategies (that is, a plan for action, building or not, based on what the other player is expected to do). If we assume, given the players’ goals, that the best outcome is to build ships alone, next is to avoid building together, next is to have an arms race, and last is to not build while the other does, it turns out we’ve got—you guessed it—a Prisoner’s Dilemma!

The game we’ll use in class is below: 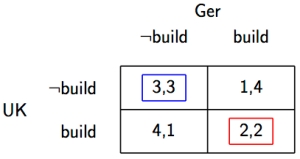 which shows the several possible outcomes of the game (and the payoffs for each player, where higher is better). In the case we’ll discuss, we know that the bottom right corner—where both build ships—occurred, yet we might be naturally curious why the one in the upper left, where the distribution of power is unchanged yet the waste of the arms race is avoided, couldn’t happen.

The notion of equilibrium tells us why, because equilibrium behavior implies that both players are doing the best they can, given what the other player is doing, and given that, neither has an incentive to change its strategy. In other words, it’s one thing to talk about how one country would respond to a lot of eventualities (and folks do it all the time), but to explain an outcome involving two countries, we have to look at how that pair of planned best responses actually add up. Turns out, unsurprisingly, that actors can get in the way of each other reaching not only an outcome that one would prefer but also an outcome that both would prefer. That, by the way, is tragedy—or, in this sense, inefficiency—a difficult-to-avoid consequence of the situation that all would acknowledge, particularly after the fact, isn’t ideal.

How does it come about in this case? It comes down to this: if one side won’t build, the other can’t commit not to build (whether to gain or extend an advantage), and if one side will build, then the other can’t afford not to build. Add these incentives up, and you’ve got an arms race. We’ve also got a possible answer to the puzzle of why inefficient arms races occur, even when there are options that both would’ve preferred—that is, retaining the same balance of power at a not-so-tremendous cost. Today, as I emphasized, though, was practice. Soon, we’ll be solving puzzles more actively, some of which have been nagging at me for quite a while…and I’m quite excited to see where we as a class end up in trying to solve them.

Also, students, if you want some extra exposure to game theory, I recommend William Spaniel‘s excellent video series, with one focusing on equilibrium and another on the Prisoner’s Dilemma specifically.