It’s been hard over the last few weeks not to get caught up in the near-constant stream of gloriously hyperbolic threats and invective coming out of North Korea (especially in Austin, which appears to be one of several places targeted for destruction just this week). However, while the overheated rhetoric, retro nods to Cold War-era ideological struggles, and visionary mashups of “We Are the World” and Call of Duty may be uniquely North Korean, the situation in which the leaders of both North and South Korea find themselves is certainly not. In fact, it’s a special case of what in my own research I call “the turnover trap“: since neither Kim Jong Un nor Park Geun-hye have been in office very long, both have powerful incentives to ratchet up tensions on the peninsula, however little either side may actually wish for the pot to boil over into a fresh conflict.

The answer to all your questions, after the jump…

Two important things happen when new leaders take office. First, they’re only rarely bound by their predecessor’s policies, particularly when it comes to ultimate decisions over war and peace. Second, they might differ from their predecessors in their resolve, or their willingness to use force. Taken together, these two factors mean that, when new national leaders take office, their opponents will be largely uncertain over their resolve, because a predecessor’s reputation may not be all that informative about a new incumbent’s preferences. Is the new leader a dove, or is she a hawk? Tragically, her opponents don’t know, and there’s at least one serious obstacle between them and the answer: this “untested” new leader has every incentive to claim that she’s resolute, that she’s tough, that she’s willing to risk war to safeguard her country’s interests, even and especially if she isn’t all that resolute.

Put differently, she’s got private information over her resolve (she’s either hawkish or dovish, say), and incentives to lie about it: a potentially dangerous combination. How does one demonstrate resolve? Well, pure talk—which is cheap—won’t do, because a dove would say the same thing as a hawk if she’d be believed, which undermines her opponent’s incentives to believe what she says. So she’s got to take costly actions to demonstrate resolve, backing up her verbal declarations of strength with actions that entail either real costs (financial or political) or increase the risks of war. Otherwise, her opponents may believe her weak—which doesn’t exactly help in things like crisis bargaining. So when a new leader takes office, there are strong reputational incentives to demonstrate resolve, which might ensure that her country’s opponents don’t make unacceptable demands in the future.

This is all well and good, of course: a reputation for resolve is hardly a bad thing to carry around. However, a new leader’s opponents also have an interest in testing her, ratcheting up tensions on their own, hoping to force her to reveal either hawkishness or dovishness in response. You’d like to get as much as you can out of your opponent, after all, but if you can do it without a war, so much the better. As a result, knowledge over a new leader’s resolve is actually quite valuable—the sooner you know it, the more easily you can calibrate tomorrow’s demands to maximize concessions at a lower risk of war—but the only way to uncover an opponent’s true resolve is, again, forcing her to respond with costly or risky actions, because (as we saw above) she’s got no incentive to just tell you honestly that she’s a dove.

What does this mean? Well, both sides in this interaction—the new leader and her opponent—have every incentive to ratchet up tensions; in a very real sense, they’re trapped by their own incentives into taking actions that increase the risk of war. New leaders want to prove their mettle, and their opponents want to test them, and sometimes the only way to do so is to get closer and closer to the brink—yet neither side finds it in its interest to change strategies. Why forego the chance to prove your resolve and prevent needless challenges in the future? Why forego the chance to exploit dovish new incumbents when challenging them might reveal that they’re ripe for it? It’s a difficult trap to escape from. 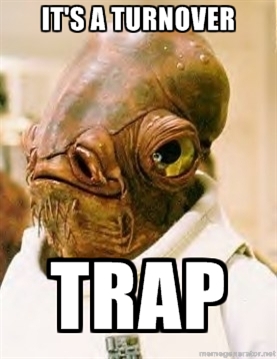 What does this mean for tensions on the peninsula? Let’s note first that both North and South Korea have relatively new incumbents, with Park Geun-hye in particular having just been inaugurated in February. Kim Jong Un has been involved in occasional bursts of bellicosity since taking office, perhaps to demonstrate his own resolve, but the most recent escalation of tensions has coincided with the emergence of new South Korean leadership, precisely when we’d think the North would like to poke and prod their neighbor to the South to see whether they’ve got a hawk or a dove on their hands. So we’ve got two new leaders with dual incentives to ratchet up tensions on the peninsula.

In fact, recent North Korean provocations haven’t all been mere talk: we’ve also seen increased levels of military readiness, including a substantial increase in fighter patrols, which entail both direct and opportunity costs (since the military and its personnel also play a large role in the North Korean economy), the conduct of and preparations for additional nuclear tests (provoking tighter international sanctions and the disapprobation of China), the severing of a high-level military hotline (one of the few direct lines of communication between erstwhile enemies), and—most recently—threats to shut down an industrial park jointly operated with the South that provides one of North Korea’s few sources of cold, hard cash. In other words, they’re upping the ante, perhaps hoping to see what the South (and its American ally) will do in response—part which that has been the publicly announced inclusion of B-2 stealth bombers in recent joint US-ROK military exercises, an expensive and rare step in the context of otherwise routine joint exercises.

What does all this mean? First, it need not portend war, even if raising tensions really does say something more meaningful than mere cheap talk; both sides merely want to demonstrate how willing they are to countenance it, not actually get into a scrape. In fact, costly signaling and reputation-building are designed to produce more favorable peaceful outcomes. However, actions like this often come with a price tag of some elevated (albeit from a very low baseline) risk of conflict. Once each side learns a sufficient amount about the other, though, we should expect to see tensions winding down—barring, of course, any other shocks to the system. (How’s that for academic equivocation?)

Second, and more importantly, this is not a story about North Korea alone; what we’re seeing right now is the manifestation of an underlying strategic story about domestic politics, leadership change, and reputation-building that occurs any time that leadership turns over in states with enemies, which raises the risk of new international crises and, as recent research suggests, arms races as well. I think we’d do well not to lose sight of this in both explaining the current tensions on the Korean Peninsula and trying to predict their consequences.